This Is the End

It's time to shut this blog down. I'll leave up the content, but my time as Adunct Nate Silber is over. I spent a long time studying how the job market in German works, but I can't do it anymore. When I started, no one really knew and no one was tracking the data that mattered. By the time I figured out how it worked, it was already too late. Now that we know how it works, no one with any influence over the profession actually cares.

So here's where we are. About 25 tenure-track jobs in German each year, tendency falling. Plenty of NTT jobs to place new PhDs in, enough to keep a lot of people on the treadmill for years, but not enough for a stable career. The grad programs are still churning out 75 new PhDs each year. And the biggest contingent of new TT faculty is still being hired from outside the system, from Germany or from comp lit or elsewhere.

For 2010-2019, there have been a handful of grad programs with TT placement rates topping out at 50% (Cornell, Harvard, U Mass, Virginia, Texas, and the UNC/Duke conglomerate). Wait another five years, and it will be a different set of programs. Not long ago, Princeton was at the top; now it's down to 37%. You could be accepted to an Ivy League grad program and still face an abysmal placement rate (Columbia at 15%, Brown at 0%), or a big prestigious private university (Vanderbilt at 13%), or a big public flagship (Wisconsin, 40 PhDs, 20% TT placement rate).

Your overall chances of getting a TT job are 30%. You're still likely to fail, but perhaps you will fail better than we did. 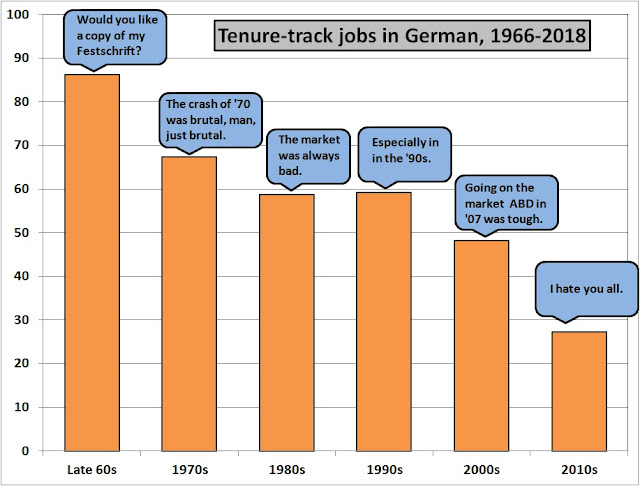 Posted by Adjunct Nate Silber at 1:12 PM No comments:

Last year was different: 17 tenure track jobs. After 7 weeks of job-list postings, 2017 is running just barely ahead of the pinnacle of awfulness that was 2016: we have 16 TT jobs this year compared to 15 last year at this point. Perhaps we'll see a few more. The opening-day number predicted 15 total, while the 6-week number predicted 19 total - but the 6-week number is, historically, not any more accurate than the opening-day prediction.

It's not impossible, but I suspect not. As you look around the country, do you get the feeling that university budgets are improving, the humanities are more valued, and the importance of foreign languages is more broadly accepted?

I think instead what we'll see is a couple more jobs trickle onto the list by spring, and the new normal will be 15-20 TT jobs in German each year rather than 25-30. Or 1 job for every 4-5 new Ph.D.s rather than 1 for every 3, since the number of Ph.D.s isn't declining.

The market is now small enough that it's hard to tell the difference between a normal level of year-to-year volatility, and an extinction event.

They’re coming to our discipline and taking away our jobs!

One of the exciting things about German Studies as a discipline is that we’re in conversation with historians, linguists, and scholars with many other disciplinary backgrounds. We talk to our neighbors down the hall in comparative literature and we maintain conversations with our colleagues in Germany.

One of the less exciting consequences is that the hiring pool for faculty in German Studies can be drawn very broadly. If there are 17 tenure-track jobs available this year, not all of the people hired will have Ph.D.s in German from North American doctoral programs. Some will hold doctorates from European universities, some will come from outside of German Studies, and some won’t hold a Ph.D. at all. Basically, think of the three alternate sources of German faculty as doctoral programs in Germany, comparative literature and other disciplines, and people with MA degrees. In the best case, this keeps our discipline vital. In the worst case, the dean can undercut any salary demand by simply offering a job to any native speaker he can find, qualified or not.

For the hiring cycles 2006/7-2015/16, a total of 91 searches selected candidates who did not hold doctorates from North American German programs (out of 814 total hires, or 11.2%). This was approximately equally split between tenure-track and non-tenure track positions (12.5% of all tenure-track hires and 10.2% of NTT hires).

In a few cases, no academic background can be determined. For tenure-track hires (42), just above half are from European doctoral programs, mostly from Germany, and just under half are from American doctoral programs, chiefly comparative literature. Only 2 of the TT hires were from the pool of MA holders, in both instances the rare case of TT hires by a community college. For NTT hires (41), around a third are MAs, a third are from other disciplines, and a third hold Ph.D.s from European programs. (The VAP numbers include 4 faculty members who were hired for multiple positions, while the TT numbers include a number of VAP-to-TT inside hires).

The largest single donor of faculty to German Studies is by far the program in comparative literature at the University of Pennsylvania (4 TT hires). Princeton comp lit and the Humboldt Universität each had 2 TT hires.

Finally, has there been any change in hiring over time? In a word, yes. From 2006/7 to 2015/16, the percentage of hires from outside North American German Studies for jobs in North American German Studies has risen from around 5% to around 20% of all hires, even as the number of tenure-track jobs in the field has declined profoundly—by around 70%—during the same time. That suggests an amazing commitment to interdisciplinary exchange and intellectual vitality for a discipline that can’t currently provide stable jobs for 75% of its own doctorates. Or maybe it suggests a lack of confidence in its own product and a desperate search for relevance.

Posted by Adjunct Nate Silber at 2:22 PM No comments:

I'm not even going to mention the outsized role that the cult of TPRS plays in secondary language instruction. Instead, I present to you the following exhibits.

First, from the College Board's AP German course description: "The AP course provides students with opportunities to demonstrate their proficiency in each of the three modes in the Intermediate to Pre-Advanced range as described in the ACTFL Performance Guidelines for K-12 Learners" (5).

As far as ACTFL is concerned, "Pre-Advanced" isn't really a thing, so we'll interpret this as saying students passing the AP German test should be at the Intermediate Mid to Advanced Low level of proficiency.

Second, this chart from ACTFL Performance Descriptors for Language Learners (13):
There's a lot that's seriously messed up here, and we haven't even gotten to what's really wrong with German Studies (high school edition) yet.
Third, an observation about college-level German proficiency testing. In German Studies, we typically care more about the Goethe Institute and the CEFR scale than we care about ACTFL, because the Goethe Institute comes from Germany and provides the language exam that 99% of people care about and that language programs in the US administer. (Plus the Goethe Institute provides huge amounts of free practice material, while ACTFL provides nothing, which is one more reason to hate ACTFL.) And the exam that nearly all German majors and minors are capable of passing at the end of their programs is the B1-level Goethe Institute exam. Students who go abroad for a year, or who spent some formative years in a German school, or heritage speakers, or the occasional freakishly good language learner have a shot at passing the B2-level exam.

Fourth, there is no complete agreement about how to map the CEFR scale onto the ACTFL scale. According to this ACTFL document (4), B1 falls in the range from Intermediate Mid to Advanced Low. Erwin Tschirner - you know, the lead author of Kontakte - thinks B1 corresponds to Intermediate High. I tend to believe Tschirner.

Fifth, according to the ETS guide to the German Praxis Exam required for German high school language teachers, those who pass the test will demonstrate "Language Proficiency in the target language. (At the Advanced Low level, as described in the American Council on the Teaching of Foreign Languages [ACTFL] Proficiency Guidelines)."

So to sum up what's wrong with German Studies (high school edition):

Posted by Adjunct Nate Silber at 2:20 PM No comments:

For tenure-track academic hiring in German, 2016-17 marks a new absolute low. To find a year where fewer positions were advertised, you would have to look back at least sixty years to the 1950s or earlier. The record low number of TT jobs advertised on opening day (7) was matched by the lowest number of TT jobs advertised all year (17), and by the earliest posting of the season's last TT job ad (in week 11, surpassing the previous record of week 15 in 2013). This year will also mark a new absolute low in the number of TT hires, as one of the 17 searches (Hamilton College) was downgraded to a VAP search; the maximum possible number of TT hires, 16, is lower than the previous low of 19 hires set in 2009-10.

For non-tenure-track hiring, it was another solid year: 41 positions advertised in the ADFL/MLA JIL before it closed, fifth highest and just a few places out of third (43 in 2007) and even on pace to set an all-time record just a few months back. But the VAP market went flat unexpectedly early this year. As far as NTT positions from all sources, 2016-17 is another solid year: 55 advertised NTT searches, just above average (54 for the years 2006-17).

The lack of late VAP hiring is something of a danger signal, as it suggests that late-spring/early-summer language department budgets are under pressure and the advertising of TT positions in the fall may be impacted.

Our profession is not in good health.
Posted by Adjunct Nate Silber at 6:08 PM No comments:

Unless something drastic happens - and it's almost May, so nothing drastic is going to happen - this year will mark a new absolute low in the number of tenure-track jobs in German Studies on the MLA job list: 17. That's two positions less than even 2009, the previous record for all-time miserable job markets. Of those 17 searches, one was canceled and converted into a NTT search.

Speaking of which: 2016-17 has been another banner year for non-tenure track jobs, with the number of ads near or at record levels all year. We're already at 39, with several more weeks still to go in a NTT hiring calendar that drags on into June and July. We'll likely end up in the range of such overheated NTT hiring years like 2005-2007, and beating the absolute record of 2014 is still a possibility.

So to recap: The economic recovery since 2008 has not led to a recovery in tenure-track hiring in German (or in any of the languages, actually). The job market in German is not going to make a comeback. There are, however, quite a few opportunities for you to stay in academia by moving every 1-3 years until you either strike out on the market or find yourself no longer geographically mobile (as long as you can live on $36-42,000 per year, including unreimbursed moving expenses).
Posted by Adjunct Nate Silber at 1:51 PM No comments:

How many full-time tenure-track or open-rank jobs in German Studies will be posted to the MLA Job Information List in 2015-16? Take your pick. Seeing how 2014 went, your pick is probably as good as mine.

My pick: 25. We'll see a reversion to the mean, and 15 more jobs will appear before the list closes, most likely before the end of February. With a bit of optimism and wishful thinking, 2015 will end up in a tie for the second-worst year in German job market history. I would love to be wrong and to see many more jobs appear, but even an outlandish fantasy like 35 jobs would only move this year into sixth-worst in job market history.
Posted by Adjunct Nate Silber at 1:31 PM No comments:

How the job market in German really works

Corrections, comments, and questions may be directed to adjunctnatesilber@gmail.com.